If you are using the SDK for the first time, please download and read the SSC guide (PDF 650 KB) to familiarize yourself with the SSC API, SSC simulation modules, and SDKtool.

Because the SSC simulation modules have a large number of inputs and outputs, we recommend generating your first SSC program from the code generator in SAM's user interface as demonstrated in this video and described below. The code generator creates a complete set of files for a ready-to-run program written in one of the supported languages and platforms listed below.

Where are the language wrappers?

The code generator replaces the language wrappers and examples in older versions of the SDK because it can create a complete set of files for a ready-to-run program for any type of renewable energy project SAM can model, and in any language or operating system supported by the SDK. The old examples were for a limited set of SAM's modeling capabilities and were difficult for us to keep up to date for all operating systems, languages, and platforms.

If you are developing applications in Python, you might want to use PySAM for your work. PySAM provides a more robust set of functions for interacting with SSC than are provided by Python code created by SAM's code generator described below.

The SSC API, or application programming interface, defines the functions you use in your code to interact with the SSC library. The functions are defined in the sscapi.h file. When you use SAM's code generator, SAM includes a copy of the SSC API with the files it generates.

If you generate code in a language other than C, SAM includes a wrapper written in the language that translates the C functions into that language.

The SSC library is a compiled dynamic library that comes with SAM that you can access from your programs using the SSC API. You can use the SDKtool or the function described in Section 5 of the SDK Guide to determine the version number of the SSC library you are using.

When you create a program using SAM's code generator, it makes a copy of the SSC library to include in the set of files it generates. You can also find the SSC library in the following default locations for each operating system in case you need to find the file yourself:

If you have written a program using the SAM API and want to update your SSC library without installing the latest version of SAM, you can download a zip file containing a library for each operating system from the SSC repository on GitHub.com.

SDKtool is an application that comes with SAM that you can use to explore SSC simulation modules and to write test programs in the LK scripting language. See Chapter 6 of the SSC Guide (PDF 650 KB) for a description of SDKtool with examples.

The SDKtool is a stand-alone application in your SAM installation folder. You can run it directly from that folder, or move it to a different folder and run it from there. 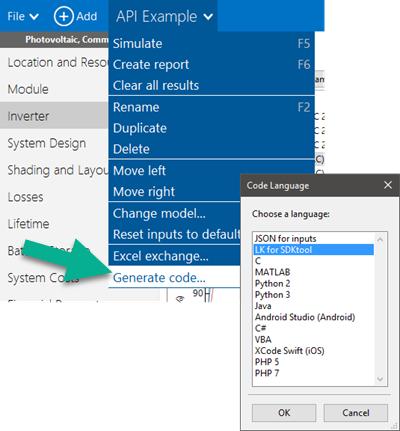 SAM's code generator generates ready-to-run programs in the languages and platforms listed below from the inputs in a SAM case. Use the code generator to start your programming project to ensure that you use the correct set of simulation modules and set values for all of the inputs they require for your modeling scenario. You can then modify the code to customize the scenario.

We have removed support for Android and iOS from SAM's code generator, but you may be able to build your own libraries to integrate SAM with applications for those platforms using the following instructions:

If you have questions or comments about the SDK, please let us know by posting a comment on the SDK support forum.

The notes below describe changes to SAM, the SSC, or documentation that are specifically relevant to the SDK.

We've updated the examples since the original release on November 24, 2014. The examples should now work with the new simulation modules (as of December 3, 2014).